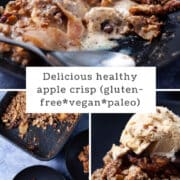 This delicious healthy apple crisp recipe is filled with sweet apples, cherries and topped with a crunchy topping.

It's naturally sweetened with dates and coconut sugar and deliciously flavored with a hint of warm spices and herbs.

It's an absolute must-make dessert that is also gluten-free, dairy-free, Paleo, and vegan-friendly!

You know me by now. Most of my baked goods are simple and easy to make, and this recipe is no exception.

Before starting this bake, you'll have to gather a few ingredients, but everything comes together rather quickly.

And because it's a healthy apple crisp that's not too sweet, not too heavy, I'm adding enough flavors to make it warm, utterly comforting, and delicious.

You'll never know it's better for you and might even convert the feverishly loyal classic apple crisp lovers.

Ingredients for the apple filling

Here are a few notes you might want to glance over before making this healthy apple crisp recipe.

Ingredients for the crisp topping

Nuts: Usually, I go for a mix between pecans and walnuts. They're deliciously crunchy, and you'll get a nice mix of sweet, buttery, and earthy.

Coconut Flakes: I love how they add a subtle and natural sweetness to the crumble mix and become very crispy once baked.

Coconut oil: If still solid, briefly melt the coconut oil in a small pan over the lowest heat setting.

Spices and herbs: a small amount of cinnamon powder, freshly minced or grated ginger, and dried Rosemary needles pair so well with the sweet flavors of apples and cherries. They add warmth to the fall flavors of this healthy apple dessert.

Step 2: Arrange apples and pitted cherries in the baking dish.

Note: you do not need to defrost the cherries. Just briefly rinse them under running water.

Step 3: blend the dates, vanilla extract, and milk until you get a light brown paste.

Step 4: stir the date paste into the apples and cherries until everything is slightly coated; set aside.

Step 6: stir in the melted coconut oil and the grated ginger until everything is barely coated.

Step 7: divide the crisp topping over the apple-cherry filling in the baking dish.

Step 8: Bake for 40 minutes or until the top is golden brown, the apples are soft, and fruit liquids are bubbling.

The fruit to crisp topping ratio is beautifully balanced, and everything comes out crunchy, with deliciously sweetened apples, cherries, and warm-flavored juices.

How to serve this healthy apple crisp

It's quite irresistible, but if you want to make it a real treat, serve it with a scoop of your favorite ice cream on top—highly recommended.

I have somewhat of a weakness for a butter pecan flavor or go for the dairy-free vanilla bean. A little scoop goes a long way.

It is equally inviting when served as a breakfast topped with some (probiotic) yogurt, my favorite, or try one made with cashew milk from Forager to keep it dairy-free.

Make it ahead of time

Need this for a particular day? Make it ahead of time, cover it and keep it in the refrigerator for up to a few days.

Then bake as directed when ready to serve.

Storage and how to reheat leftovers

Store it in an airtight container in the fridge. This healthy apple crisp easily reheats in the microwave or over the stove for a couple of minutes.

You can even eat it cold, straight out of the fridge, first thing in the morning, but it's always better to quickly warm it up if you have a little more time.

It stays fresh for up to 4 days.

I hope you make this recipe! If you do, please leave a comment and a starred review below. 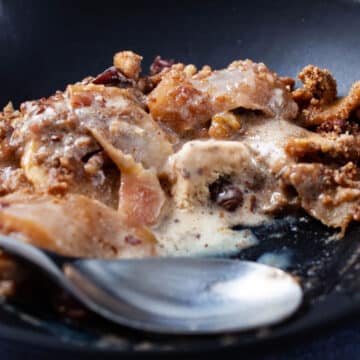 Rosemary: you can substitute 1 teaspoon of dried needles with 1 tablespoon of fresh Rosemary needles. Process shots: see process shots in the post for how to cut the apples and make this delicious healthy apple cherry crisp. Cherries: When in season, use fresh cherries!

This post was originally published in April 2017 and has been updated with an updated recipe, new pictures, and new information.