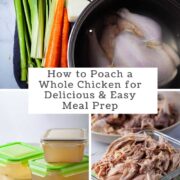 This basic poached whole chicken recipe is one of the easiest yet most rewarding and cost-effective nutritious food you can make in your kitchen.

It promises a rich chicken broth, fall-of-the-bone tender meat, and a light stock you can use to make many delicious recipes.

You'll get flavorful, simple ingredients from one whole chicken and endless dinner ideas.

I will show you how to poach a whole chicken at home. It's easy to do and perfect if you are into meal prepping.

Make it on lazy (Sun)days. It will save you money and give you the tastiest ingredients to produce several healthy meals for the week or weeks ahead.

Why you should poach a whole chicken

Poaching versus boiling a whole chicken

Since you are using the whole chicken from its bones to its tissues and fat, choose the best quality poultry you can afford—free-range and organic if possible. It plays a role in the taste of the broth and the meat.

How long does it take to poach a whole chicken

Should you remove chicken skin before cooking

It will give your collagen-rich broth that perfect balance of fat and flavor and prevents the meat from becoming dry.

If you really want a lighter broth, refrigerate it overnight. The fat will congeal on top, and you can skim it off before using it.

Elevate the flavors of your broth and shredded chicken

SALT—add at least salt to the poaching liquid. Sometimes adding nothing else but salt is preferred when you want to use the collagen-rich broth and shredded chicken as a base in recipes where you want to control most of the flavoring when making the final dishes.

ADD HERBS OR ONIONS—Want to upgrade your broth so that enough flavors are present to enjoy immediately? Then add onions, a few garlic cloves, and herbs such as fresh rosemary or thyme. Those ingredients all add aromatic flavors perfect for making brothy soups or adding a bouillon-like flavor to cook rice and quinoa.

ADD VEGGIE SCRAPS—The ends of carrots, leeks, onions, and even carrot leaves—all my favorites—can be added initially and then strained and removed afterward.

It's a great way to use vegetables for making a tastier broth without feeling too guilty about throwing them out before proceeding with fresh vegetable ingredients to finish your (chicken) soup or dish.

ADD FRESHLY CHOPPED VEGETABLES—You can always add newly chopped vegetables like carrots, onions, leeks, or celery from the beginning to give extra flavor. They're even tasty enough, in my opinion, to enjoy in a cup of broth that same day. But they might be too mushy and not bright enough to use in soup recipes. So I would eventually strain them, but it does add a lot of extra flavor to your broth.

What to do with chicken giblets

Sometimes, you'll also get chicken giblets like the heart, neck, liver, and gizzards.

I add these to the pot, except for the liver—it has a distinctive taste that can overwhelm the flavors of the broth.

Note: Single out the liver, refrigerate to pan-fry later with garlic and onions to toss on top of your green salad for a quick lunch.

How to poach a chicken

It's easy. Just pay attention in the beginning. But once you have that slow tempo of bubbles coming up now and then, you can walk away doing other stuff while keeping tabs on time and checking in occasionally.

That slow bubble is really key to getting that beautiful tender meat.

How to shred the chicken meat

What to do with the broth

Note on skimming, straining the broth

Sometimes a foam (solid proteins) rises to the top when slow-poaching a whole chicken.

I still have the habit—thank you, mom—of occasionally skimming it off with a ladle.

But I am not overly obsessed about it and am less concerned with an utterly perfect strain that might leave some of these bits of protein sink to the bottom. At least not for a (chicken) soup.

But if you want to get it clear, like a consomme type of stock, strain it before it is completely cooled.

What's next? Try this simple chicken salad recipe to use up that shredded chicken, an Asian-inspired buckwheat noodle soup that can use some of this chicken broth, and make this delicious Stracciatella (or Italian egg drop) soup.

I hope you make this recipe! If you do, please leave a comment and a starred review below. 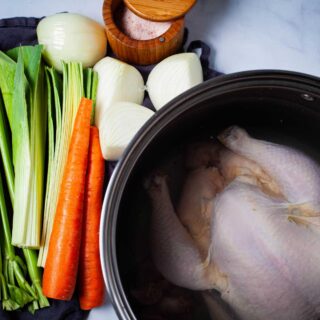